The Birth Of Soviet Watchmaking – An Interview With Alan F. Garratt

Continuing with our aim to conduct interviews with particularly relevant personalities in the world of Soviet and Russian horology, today I have the pleasure of introducing Mr. Alan F. Garratt.

For those of you who don’t know him, Alan F. Garratt is the author of the magnificent book “The Birth Of Soviet Watchmaking”, which uses extensive documentation to describe the birth and establishment of the Soviet watch industry and its incredible relationship with the North American watch company Hampden Watch Co., which Mr. Garratt has written about even more widely in his great blog www.hampdenwatches.com.

For aficionados of this particular segment of watchmaking, his work is, without a shadow of a doubt, the best source of information for understanding the “protohistory” of Soviet watchmaking. Mr. Garratt’s book has become an obligatory reference source for enthusiasts or neophytes, and it would be impossible not to refer to his body of work when researching or publishing anything about the first watches manufactured in the Soviet Union.

In addition to his book, it is very fortunate that Alan is also affable and communicative. It still makes me emotional to remember when I authored my first work about the Chistopol factory, which went largely unnoticed, that Alan contacted me and, among other things, told me the following: “Hope you’re finding new angles to research…” Back then, his words were a massive encouragement to carry on and complete the definitive version of the article, which we have previously published. Now, I am proud to say that Mr. Garratt has included a direct reference to my work in “The Birth of Soviet Watchmaking”.

Without further ado, here is the interview with a person I consider a true mentor in the great adventure which is The Russian Watch Corner.

Exclusive interview carried out by the publication and editorial team of safonagastrocrono.club, on March 5, 2020

Alan, I believe my first question might seem rather obvious, yet necessary. What gave rise to your interest in Soviet/Russian watchmaking, and when was the “first contact” moment?

Put simply it stemmed from my interest in Hampden watches. And that all started when I was visiting a rubber company in New Delhi in the early 2000’s. I was trying to understand how they had acquired an Ozone test cabinet my company manufactured and sold to Fiat, Turin, some 25 years earlier. It transpired they won it on eBay. This was my first experience of internet auctions and back at the hotel I searched for “Hampden”, the name of the UK company I worked for. To my surprise, up came pocket watches from an obscure American watch company and I was hooked. It was a little later, whilst reading James W. Gibbs’ book ‘From Springfield to Moscow’, that I learned about the sale of the Dueber-Hampden factory equipment to the Soviets in 1930.

What was the principal motivation for writing your book “The Birth of Soviet Watchmaking”?

That’s an easy question to answer. I was bursting to find out what happened after 1930, but there was virtually nothing to read, at least not in the West. I later discovered there wasn’t much in the old Soviet bloc either. The little information that was to hand was disjointed, often misleading and not very helpful. So I had to scrap around and follow one lead after another. A well respected enthusiast, the late Mark Gordon, always promised to write a definitive book on the subject, using material he had acquired from the estate of Dieter Brunow, but this never materialised. So when I retired in 2008 l started to organise my research which resulted in my Hampden Watches blog and then, as it grew, my separate Birth of Soviet Watchmaking blog. By 2018, I was unhappy with the blog format, as it was cumbersome to navigate, so I placed the two stories in one purpose built website.

In my view, Soviet watchmaking tends to be looked down on, in general, among watch enthusiasts. I always try to combat this negative image in my articles.

I agree with you. I think it reflects a common view people in the West have about the Soviet Union, one of crumbling concrete façades. If I’m honest it’s a view I shared before I looked into the subject in more depth. Comparing Soviet and Western made goods should not be to compare apples with apples, you’re better comparing apples with bread. To use watches as an example: the Type-1 watch made in Moscow in 1931 is without any doubt inferior in quality to its forebear the Dueber-Hampden size 16 watch which was made, with the same equipment, in 1926. But, and it’s a significant but, the watch made in Moscow worked, it worked in extreme conditions, it could be repaired with a hammer and sickle and it would last for years. Was it as pretty as the Dueber-Hampden? No. Was it as accurate to the second per day as the Dueber-Hampden? No. But isn’t that a theme that runs throughout Soviet industry, their criteria for manufacture was not that of a consumer society? The fascinating thing is that over the following six decades they learned the art of watchmaking well and they not only out-stripped the US but also started to produce watches of fine quality, both aesthetically and technically. I remember the popularity and reputation of Sekonda watches in the UK during the 70’s and 80’s.

Given that your book is a reference piece for those interested in the segment, what advice would you give to anyone starting out in this interesting field?

The best advice I could give is to learn Russian, or marry a Russian. I never did either and it slowed me down in the first instance, but it fortunately meant I married a lovely Gloucestershire lass in the second instance. At least get some good online translation software like Yandex. Oh! and OCR (Optical Character Recognition) software, so you can scan Russian books and translate them. Many Russian documents are saved in DjVu format so you will also need a DjVu reader. Be patient when translating. An example of the difficulty in translating Russian is the crucial word “Watch”. It doesn’t exist in this context in Russian. The closest you get is “Hours”. English speakers don’t question the word “Watch”. We take it for granted. But think about it for a moment, the word “Watch” has a tenuous association with a device that tells the time. If a TV had been called a “Watch” it would make more sense. I have had the privilege of speaking with many Russians, or people of Russian descent, who have through personal knowledge, or interest, given me a great deal of help. None more so than Dmitry Pruss, the great- grandson of pioneer watchmaker Wolf Pruss. Dmitry delves deep into Russian archives to discover more about his family and kindly shares anything of interest about the early factories. It’s not only people of Russian descent though, enthusiasts from around the world have all helped with translations and passing on information. My interest in watches per se is limited, it’s the social history of the factories and the people associated with them that has always driven my interest. Anyone just starting out has a wide spectrum to interest them, the sphere of Soviet watchmaking is truly enormous. Miguel, you and I first became acquainted through the ‘watchUseek forum’ and I would advise anyone new to the genre to explore the many specialised forums that exist. And not to be put off looking at ones in other languages, such as your own in my case. I would recommend ‘cccp-forum.it’, an Italian forum that holds a wealth of archive information and who are very welcoming. I am no longer an active member of any forums because I find that historical topics have, by and large, been swamped by contributors who are more interested in modern watches. That’s not a criticism, it simply reflects my interest in the social history of the subject rather than the actual watches.

Do you consider your book an “organic” piece, i.e. something that can be expanded upon and is not quite finished? Do you believe that the current ability to produce virtual online publications makes this easier? Do you think we’ll ever see a print version? What are your next projects?

You have hit the nail on the head Miguel, organic is what it is. I tried to publish it as a book and got so far as to have six handmade copies made. Before I could get the printing organised new information materialised and in a flash the book was out of date. There is so much unknown and so long as the story remains incomplete the ability to update, or reorganise, the website is invaluable. However, because the ‘second edition’ of the book had been set ready for printing, I decided to offer a version as a free PDF download. The idea being to ask anyone downloading it to consider making a small donation to the ‘Against Malaria’ charity via a link. So far <10% of those downloading have done so. Whilst that’s a disappointing percentage, we have managed to raise €325 to buy Mosquito Nets. My next planned projects are watch free and involve old tractors. But, as in the past, something watch related will probably pop up and I’ll get suckered in again.

I found the “The Herman Appendix” and “Amtorg” to be of great interest. Are these mere supplements to “The Birth of…”, or is your aim to expand your research?

Herman London was a totally unexpected chapter, and because his grandson was the source of much information I felt it warranted its own appendix, which he co-authored. Writing this story took some time because his family’s feelings and memories needed to be blended with some harsh realities. I believe my story of his involvement in the birth of Soviet watchmaking is complete but his grandson Vladimir is writing a more comprehensive family history. In fact, it was this episode that made me realise the first book edition was already obsolete.

Amtorg’s role is another fascinating adjunct to this wonderfully rich story. It was researching Amtorg that made me determined to try and correct what I saw as wrongs. Armand Hammer was always credited, especially in the US, as the Amtorg man who bought the Hampden factory and shipped it to Russia. In fact, there are many reports that the Moscow factory was called the Hammer Watch Co. As it turned out, he played little or no part in any of Amtorg’s activities in the US. The most prominent link I could find between Hammer and Russian watches was Armand’s great-grandson Armie Hammer! He was the actor in ‘The Man from U.N.C.L.E.” who wore a Pobeda (homage) watch.

And finally, is all this work about Soviet watchmaking a mere chapter in the life of Hampden, or has it now attained a life of its own?

Ha! Ha! My answer is both… but that doesn’t help answer your question. My Hampden story involves four incarnations of that name and hence four Hampden chapters. My field of interest in Soviet watches is very narrow and really only covers the period surrounding 1930-1940 when the USSR first set out to manufacture Dueber-Hampden pattern watches. Indeed, over the years I have edited out large sections of the Soviet story that strayed into other facets of watchmaking, like Fred Lipman’s involvement and the history of the Sturmanskie and Gagarin. I will never stop looking for missing pieces of this puzzle, but I’m determined to restrict my story to the Hampden related aspects of Soviet watchmaking and as far as I know that ends with the demise of the Type-1 movement (Zlatoust 191-ChS diver) in the 1970’s.

2 comentarios en «The Birth Of Soviet Watchmaking – An Interview With Alan F. Garratt» 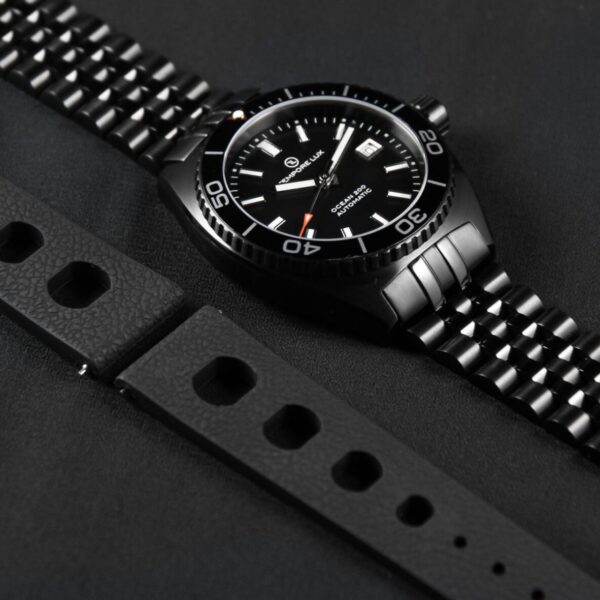