One of the true pleasures of writing this little bloggy-wog is that occasionally you come across some remarkable people. Timothy John is one of those folks. An incredibly talented artist, he is also known to many pen and watch fans for his collaborations. And in his spare time, he is a tireless advocate for Parkinson’s Disease research and awareness.

Ladies and gentlemen, a few minutes with Timothy John –

James Henderson – What was your first watch? Was it a gift? Is there a story behind it?

Timothy John – My Dad gave me a SEIKO 5 Stainless Steel AUTOMATIC when I was about 10 years old. It was magic! I was hooked.

My first real watch memory was as a really young child, spending lots of time with my Grandfather, my Mothers’s Dad. I used to sit on his lap, help him pack his pipe with tobacco, and he would let me examine his gold hunter style pocket watch. It was so beautiful, so heavy in my little hand,

and its guilloché’d case was so tactile, and mesmerizing the way it caught the light. I loved my Dad and my Grandfather (or Gar as we would call him) very much.

JH – When you were a kid, what did you want to be when you grew up?

In the back of my mind I thought it would be good to be a marine biologist, but in my heart, I only ever wanted to draw and paint.

JH – Where did you go to school?  What did you study?

TJ – I went to Glenelg Primary School and then on to Brighton High School here in South Australia. I hated school, from day one. I just wanted to be with with Gar, my Grandfather, listening to his stories and walking around the garden. The saving grace of high school was my art teacher, Mrs. Brown, she was wonderful, so encouraging and so in tune with how I thought. The art room was my refuge and sanctuary. I didn’t graduate High School due to my lack of interest. I did however obtain a Masters Degree in Visual Art from the University of South Australia many years later, when I was invited to study, having my years of artistic professional practice taken into consideration, in lieu of academic achievement. That was a very strange experience, going from the solitary existence of being a full-time artist, to working alongside others in an academic/studio environment.

JH – Did you always know, or feel that you would be a full-time artist?

TJ – I always wanted to be, I just did not know how it would even be possible. Kind of like a wide eyed child wanting to be an astronaut…where do you start?

Thankfully I was ‘discovered’ by Australia’s greatest arts impresario and gallery owner Kym Bonython (God Bless him) after he saw some of my drawings on the wall of a local café, he tracked me down and invited me to take part in a group exhibition at his gallery…that was the start of this amazing journey.

JH – While you have done some work with watches, I have probably followed your partnership with Montegrapa the closest.  How did you get involved with them?

TJ – Connecting with Montegrappa, was somehow written in the stars…it was meant to be. I had long been a fan of Montegrappa, their story and their attention to the art of pen making.  I had ideas ….I always have ideas…way too many ideas!

Anyway, I had the idea of hand painting pens, of course this was nothing new, but I wanted my pens to have the passion and the vision of my large studio paintings. I am in no way a miniaturist, I do not have the skills for the work of these artisans, that I hold in highest regard. I just wanted to paint and create unique pieces.

It was yet another, “I want to be an Astronaut moment”, and I did have questioning self doubt, as to why a great luxury goods company would want to take a risk on me. So, I took a deep breath and wrote to Giuseppe Aquila, CEO of Montegrappa, introduced myself, and told him of my idea to create for him, for Montegrappa. Well, as I say, the stars must have been in alignment, because he completely understood my proposal, and embraced it and said yes, “let’s give it a try”. From that day we connected in a wonderful friendship, I was truly blessed. Getting a foot in the door of any company is very hard, even more so in the rarified world of luxury goods, but with Montegrappa and Giuseppe, it was as though it was meant to be.

At the moment I have other collaborations in mind (again…SO MANY IDEAS!) to get in front of other luxury brands, projects that I would love to get happening, again to raise $$ and awareness to Parkinson’s, but it is so hard to speak to the right people.

JH – Can you tell us about some of the pens that you collaborated on?

TJ – There have been 2 major projects, the first was a boxed set of 4 pens “La Quattro Stagioni / The Four Seasons”, each pen was an impressionistic interpretation of a season. https://www.timothyjohnfinearts.com/montegrappa-four-seasons-pens-uniqu

After those 2 projects I started to lose confidence in myself, because my hand began to get tremors, and I became depressed, so I didn’t do any more painted pens, although I did keep drawing ideas I had for pens, and I filled many notebooks.

When I received my diagnosis of Parkinson’s Disease, I let Giuseppe know that maybe I would not be doing any more collaborations and he was so kind and supportive. He was so understanding, and never said never to me returning to the creative family of Montegrappa. Giuseppe asked me if there was anything he could do to help me through this worrying time with my health, and that is when we came up with the idea to create the “Tulip for Team Fox” pen, to help raise money and awareness of PD through the Michael J Fox Foundation.

That was so wonderful of him. I designed the clip of the pen, and we collaborated on the overall design, and the Montegrappa design team pulled it all together.

What have been some of your personal favorites?

TJ – Yes I have done a lot of watches, mainly hand painted dials, for small boutique brands, but my favorites have not been created …yet.

Again, I have notebooks overflowing with designs for watches and jewellery…I would love to see some come to light.

JH – Many of us who know you through social media have been, frankly, amazed at your continued, fantastic work despite your personal battle with Parkinson’s Disease.  I personally am struck by your continued dedication to your craft despite the many challenges that most of us will likely never fully understand.  I apologize if this is a vapid question, but what pushes your work forward?

TJ – My drive to work is purely selfish, I love creating and it is what I do, I cannot do anything else. My 2 great loves in life are my darling partner Lorraine, and my work, I treasure both so very much.

JH – You have become something of an ambassador for the cause of Parkinson’s Disease awareness and the search for a cure.  How did you first become involved with Team Fox For Parkinson’s Research?

TJ – That is a lovely thing to hear, I am glad that I have been able to shine a light on Parkinson’s through my work, once I was diagnosed I had to give myself a reason to keep creating whatever and however I could, I was very depressed and needed to work through it. The idea to do the Parkinson’s pen for Montegrappa connected us with the Michael J Fox Foundation, and it became “Tulip for Team Fox”. Giuseppe (Aquila) was instrumental in pulling all the threads together, to make this project happen.

On the matter of my PD, I am going through a bit of an identity crisis at the moment.

After being diagnosed by my family doctor with suspicions of PD, I was clinically diagnosed by a Neurologist, I was then put on Parkinson’s medications which at first were very successful in ‘quietening down’ my body tremors and other symptoms, but over time the medication’s effectiveness diminished, and started causing me bad side effects. This, along with the new symptoms, made me seek out another opinion, and after the same scans and the same tests that were performed by Neurologist Number 1, Neurologist Number 2 has said, he doesn’t think I have Parkinson’s! So, at the moment I am having more tests with a Neuro / Biologist who is testing my brain chemistry.

I still am having ‘off’ times with symptoms, but the thought of NOT degenerating with Parkinson’s is so wonderful, and the chance that whatever neurological damage/problems I do have may be treatable and possibly repaired is amazing.

Whatever the outcome, whether I do have Parkinson’s or whether I have been misdiagnosed I will always want to contribute in any way I can to find the cure for Parkinson’s and I will do what I can to raise $$ and awareness for the cause.

I have met so many people with the disease, and no matter what my final diagnosis is, I feel I am still  part of that community and I want to do all I can to help.

JH – If you could pick any watch brand out there (or maybe more than 1) to make a limited edition collaboration with, who would it be?

TJ – That is such a difficult question to answer, as I love so many brands and it would be such an honour to collaborate with any of them. I think maybe I would try to satisfy my love of jewellery and watches, and say a collaboration with CHOPARD would be a dream come true, I admire what they do so much. It would be such a wonderful experience to somehow contribute to their creations. The watches I tend to design are more jewellery pieces, so I think CHOPARD would be the perfect fit.

JH – My emphasis in my undergraduate degree was “New World Literature” and that was my first introduction to Christopher Koch (The Boys In The Island, The Year of Living Dangerously) and it was a revelation for (an admittedly not-so-sophisticated) American about Australian identity.  I realize it’s a loaded question, but what does Australia mean to you?

TJ – That really is a loaded question, I am not really sure how to answer…Australia is a ‘feeling’, Australia is home, it has given me my artistic sensibilities, influencing the way I see things saturated in the clear Australian light. Australia has also allowed me to be me, to grow at my own pace, to explore and make precious mistakes. In many ways, the tyranny of distance if used wisely is a gift.

People talk about the Australian way of life, mateship and the Aussie larrikin character, which to a degree is all true, but there is an understated quiet sophistication in Australia.  Like all countries we have our problems, hopefully we are smart enough and compassionate enough to solve them.

JH – If you weren’t doing this, what do you think you might be doing?

TJ – Well, I would be travelling the world, surfing and walking barefoot on beaches…of course I would have a sketchbook and some paints in my backpack!

JH – What advice do you have for the next Timothy John out there?

TJ – That is easy…be true to yourself, be humble, be kind, help people without expecting praise or reward.  Stand by your beliefs, but listen to others and be willing to learn.  Look for the poetry and beauty in life and remember there is no profit in deceit.

Fugue Introduces the Fiction One

Hands-On Breguet Classique 5157 Review — The One I Want 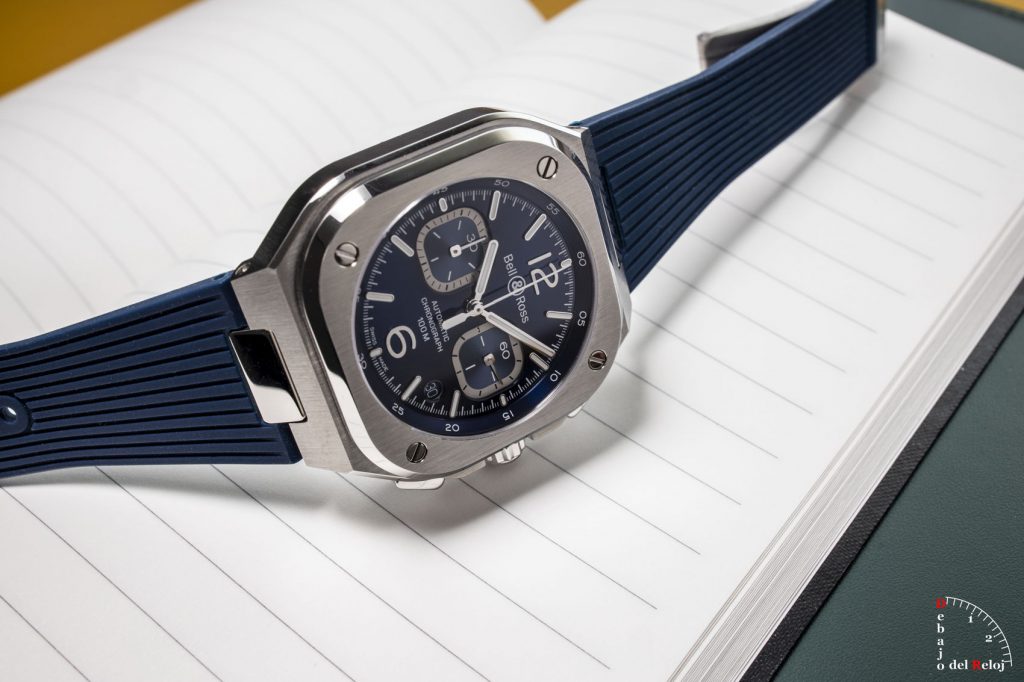